You are here: Home / Supporters Club

The Leitrim GAA Supporters Club (Dublin Branch) is delighted to invite you to attend the Supporters Club annual launch on Thursday January 16th at 7.30pm in the Celtic Suite, Croke Park.

Excitement is building ahead of the annual launch of the Leitrim Supporters Club in Croke Park on Thursday, January 16th.

The gathering touches on all things Leitrim, and MC Colin Regan will interview the county’s new hurling All-Star James Clancy to find out what the Lory Meagher Cup win meant to this stalwart. Senior football manager Terry Hyland will be quizzed about plans for 2020 as the county prepares for an incredibly competitive Division 3 national football league, while Eamonn Duignan, chair of the Leitrim Wall committee, will reflect on what became a success story of national interest.

The assembled crowd will also be treated to interviews with special guest Sean McGoldrick, sports journalist, author, and native of Newtownmanor, and Leitrim Person of the Year, Noel McPartland, of Drumshanbo.

The finale of the evening will be a lively music session with renowned uileann piper Neilidh Mulligan and family. Neilidh has a strong Leitrim connection – his father Tom being a native of Bornacoola and a founding member of St Mary’s Music Club in Church Street, Dublin. Neil has been a tutor at the Joe Mooney Summer School for years and represented Bornacoola in Scór in the late 1970s. They will include tunes from his award winning ‘The Leitrim Thrush’ album.

This annual gathering has become a must-attend event for Leitrim people in Dublin and the surrounding counties, with 170 attendees last year. It makes a point of acknowledging and celebrating the lives and times of Leitrim’s foremost citizens and entertainers and is sure to have something to amuse anyone with roots or an interest in the county. So, please spread the word to your friends and come along on the night.

Doors open at 7pm with the event getting under way 7.30pm sharp. Light refreshments will be served. There is no charge for entry but attendees are encouraged to buy a Supporters Club ticket on the night and a special draw will take place for those who purchase one or take a booklet to sell. The night will conclude at 9.30pm.

Transport will be provided from Leitrim for anyone who wishes to attend FOC, the following are the bus times.

Please inform Leitrim GAA Assistant Secretary Attracta O Reilly at 0861708499 if you intend to travel on the bus.

Online purchase of Supporters ticket will be available here on LeitrimGAA.ie from January 17th 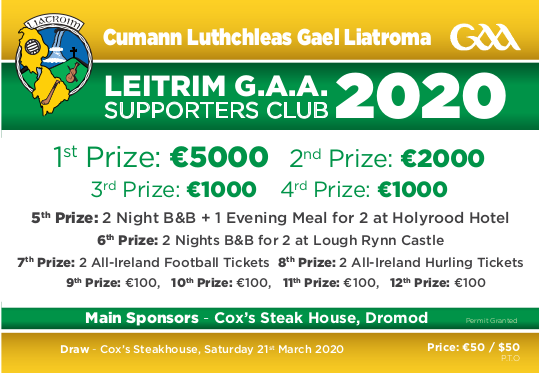 You can join the Leitrim GAA Supporters’ Club now by paying online using your credit card.  To do this, just click on the PayPal Buy Now button below and follow the instructions.  This is a secure electronic transaction on the PayPal.com site.

NOTE: You are not required to sign up for a PayPal account, but you may do so if you choose.

How else can I join?

Please contact the Admin office or any county board or club officer.

What do I get?

Prize Draw
All members registered before the draw date will be entered in the draw.

If you do not receive your membership card and car sticker within 12 days then please click here to report problem.

Don’t forget to check out our other fund raising ventures ! 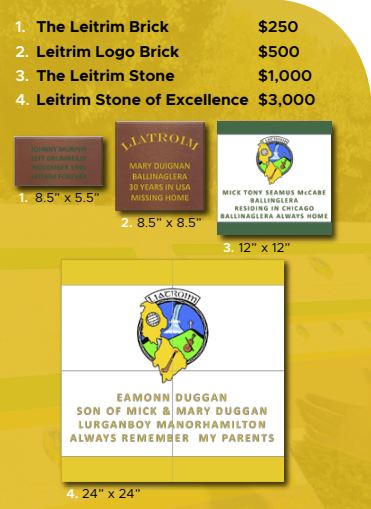