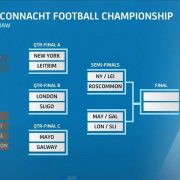 We all knew of the pending New York encounter in the quarter-final of the Connacht Senior Football Championship 2018, as we look forward to our fourth visit since 2003 to the Bronx on May 6th next. Of course, we cannot afford to look any further ahead than this always difficult assignment in Gaelic Park, but should we be successful in our first Connacht Championship outing, we now know that neighbours Roscommon, the current Connacht Champions await in the provincial semi-final, a match that would be played in Páirc Seán Mac Diarmada, following tonight’s eagerly awaited draw.

On the other side of the draw, Sligo will meet London in Ruislip, while Galway and Mayo clash in Castlebar in the remaining quarter-finals, with the respective victors meeting in the other provincial semi-final. All in all, the draw has almost mirrored the 2017 campaign, with London and New York swapping sides!!