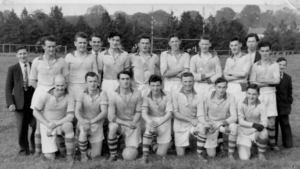 Leitrim GAA wishes to offer its deepest sympathies to the family of the last Paddy McEneaney, Lurganboy, Manorhmilton, who passed to his eternal reward on Saturday, December 17th. The late Paddy, a native of Cavanaguillagh, Castleblayney, Co. Monaghan, has been very positively associated with the Glencar/Manorhamilton GAA Club over many decades and has held a number of prominent officer positions in the club during this time.

Our sympathies are extended to his wife Julia, his children Siobhán, Gerardine, Eibhlín, Dympna, Mary, Róisín, Patrick, Terence, Cathal and the extended members of the McEneaney family at this sad time. May he rest in peace.

Funeral arrangements are located below.

Leitrim GAA would like to be associated with messages of sympathy, following the passing of the late Michael O Rourke, Riverdale, New York and formerly of Carrigallen, County Leitrim.

Michael Ó Rourke loved the hills of Druminchin, the fields, the whins, the buchalláns and the neighbours that his nephew Séamus wrote about so emotionally in his STANDING in GAPS memoir.
Michael walked every inch of these fields before emigrating to the United States, but in reality, he never left home. Like so many other Irish in New York he became immersed in his new surroundings and a committed member of his community, while at the same time keeping up to date with events back in Drumshangore, Drumeela, Carrigallen and Leitrim. After emigrating in 1958 the news came to the Big Apple through family letters and the weekly Leitrim Observer, but Michael in recent years became a whiz kid on mobiles, WhatsApp and various social media sites that others his age did simply not explore, but he wanted to be the first with the news from Leitrim.
The GAA was always part of Michael’s life, from his playing days with Drumeela Harps, Drumreilly, Carrigallen and Aughawillan, as a Leitrim referee to lining out in Gaelic Park or being a regular along the sideline every Sunday with his life long friends Mike Dillon and Larry Dolan.
His generous heart saw him financially support the Leitrim Club in New York, but also the Leitrim County Board and Leitrim teams back home. as well as Carrigallen GAA and its club grounds and also the Carrigallen/Aughavas St Joseph’s Ladies teams. As well as being a fan of football and hurling Michael had a special interest in Athletics and Cycling and enjoyed both well into his later years. He also had a keen interest in amateur Drama, nurtured through being on stage with people like Mickey O’Brien and Con Reilly in the Drumeela Drama Troupe in venues like Fargie’s Shed or in Doogra Hall. He would have found his years in the Fordham Dramatic Club a bit more up-market.
Michael served in various official positions with the Leitrim Society New York, including President and was always at the forefront of promoting Leitrim and its people. He was honoured on various occasions for his contribution to Irish culture, but the greatest satisfaction he got was from simply doing his bit to help others.
Now his passing will evoke many memories of a great New York and a great Leitrim man. Sincere sympathy to his family and to all the O’Rourke family in Drumshangore and in Manorhamilton.

A great sadness has fallen on the Ballinamore Seán O’Heslin’s GAA club this morning with the news of the death of Andy Duffy. An iconic figure in the club for the past forty years, whether it was serving as Cathaoirleach or Rúnaí, or checking tickets on Lotto night.

Andy’s life revolved around two things, his beloved Mayo and his equally beloved Seán O’Heslin’s. He was one of Mayo’s most loyal supporters and it didn’t matter whether they lost nine or ten All Ireland Finals, he would be in Tralee or Ballybofey for their next League match. His car would be gone in the early morning, but he would always be back for Prior’s or Lawrences that same night.

Andy was Secretary of Ballinamore Seán O’Heslins for a thirteen-year period 1986 – 1998, during which time the club won three Senior Football titles. Those were the days when the Secretary would also act as a selector. He was one of only four clubmen to fill the role of both Chairman and Secretary at different times, the others being Brendan Kieran, Brendan Burns and Alan Banks. Andy was club Chairman from 2002-2004.  He knew every detail about the club’s successes, even for the years long before his involvement.

One of Andy’s most memorable successes in GAA terms, it wasn’t on the football of play at all, but in the Gleneagle Hotel in Killarney in 2002, when he was part of the club’s team which won the All Ireland Scór Tráth na gCeist. After more than 20 years of competing in Scór, the team of Andy Duffy, Seán Ó Súilleabháin and Walter Sharpley took the title. Andy was well-read on a variety of subjects, and he had a great interest in taking part in table quizzes of any sort.

A native of Kilmovee, Co Mayo, Andy attended St Nathy’s College, Ballaghadereen as a boarder. His family moved to near Mullingar, but Andy remained a Mayo man all his life.  He attended forestry college in Kinnity, Co Offaly for one year and then spent three years in the college at Shelton Abbey, near Arklow. It was here he first took on an officer position in the GAA as secretary of the Forestry College team.

Andy’s most significant intervention on behalf of the club came in the early 2000s when it was proposed to move away from the current pitch, due to persistent flooding. Andy offered to personally fund the investigation of a pumping system to stem the flooding. This was the catalyst which led to the development of the current facilities.

In latter years, Andy assisted the club in many ways, selling lotto tickets in his favourite pubs, sorting the envelopes on lotto night and filling in numerous tickets for his nephews and nieces in Gaybrook, Mullingar or Ballycumber, Co Offaly. Andy was generous with his time and money for any GAA cause.

Despite failing health, one of Andy’s last jobs was hoisting the tricolour and club flags on the day of a big match in Páirc Sheáin Uí Eislin. Andy had a box in the porch with flags of every conceivable combination of colours, ready for any occasion.

Today, the tricolour flies at half mast at his beloved Páirc Sheáin Uí Eislin in memory of one of the club’s greatest and most memorable administrators – Aindrias Ó Dubhthaigh, go mbeidh leaba i measc na naomh agat, a fhir uasail.

Andy’s remains will be reposing at Smith’s Funeral Home, Ballinamore on Sunday from 5.30 to 7.30. Removal on Monday evening to Gainstown Church, Mullingar and funeral on Tuesday. For final details link https://rip.ie/death-notice/andrew-andy-duffy-ballinamore-leitrim/510156

Leitrim GAA would like to offer its condolences to the family of the late Patrick McNulty, Rossinver, County Leitrim, who passed to his eternal reward on Wednesday last. Patrick was a tremendous supporter of his club Melvin Gaels and also the Leitrim GAA County teams. On an annual basis, Patrick travailed the highways and byways of his native North Leitrim area raising funds for the Leitrim GAA Supporters Club. He loved to attend matches at Avant Money Páirc Seán Mac Diarmada and far beyond in support of his native county over the years.

We extend our deepest sympathies to his brother Hugh and extended family and friends. Patrick’s funeral arrangements are located below.

Leitrim GAA is deeply saddened to learn of the death of Pat Conefrey, late of Corrawllen, Carrigallen, County Leitrim. Pat was a former Principal Teacher of Drumlea NS, having previously taught in Gortahoose NS, before its closure. Throughout his time teaching pupils from the club area of Drumreilly, he imbued in them a love of Gaelic Games, which has borne much fruit in his club and indeed onwards towards the production of many players who excelled at inter-county level over the decades.

Pat himself was a former Senior player with Leitrim and featured regularly on the famous team of the late 1950s which contested a number of Connacht Finals of that era, and continued to play for the county into the 1960s. In his early playing days, he was also a member of the 1956 Erin’s Hope team which featured the St Patrick’s Drumcondra Trainee teachers who won a Dublin Senior Championship at that time. At the local level, he played his club football with Fenagh.

On the GAA administration front, Pat was a former officer of Bord na nÓg Liatroma and was the first Cathaoirleach of Cumann na mBunscol Liatroma. In 2007 he was inducted into the Leitrim GAA Hall of Fame and was presented with the Jim  Lynch Hall of Fame Award in recognition of his lifetime contribution to the GAA in the county. Pat had many strings to his bow and his weekly column as Drumreilly local correspondent in the Leitrim Observer was widely read and his careful and encyclopedic recall of what was then current and indeed many GAA past glories in his local area is a permanent record of events of those times.

We extend our deepest sympathies to his family and wide circle of friends. Ar dheis Dé go raibh sé.

Leitrim GAA are saddened to learn of the death of Pat Egan, Corrabeagh, Foxfield, Fenagh, Co Leitrim. Pat, a former referee with Leitrim GAA for many years and and father of current referee Enda Egan. Pat was more recently a long standing member and former Chairman of the Leitrim GAA Hearings Committee and Match Day steward and friend to many.

Leitrim GAA wishes to offer its sincere sympathies to the Kenny and Hanrahan Fianilies on the sad passing of Breedge Kenny, Drumshanbo.

Reposing at her home in Drumshanbo from 4pm to 8pm on Friday, 3rd June, (Eircode N41 R156). Funeral Mass at 11 am on Saturday, 4th June, in St. Patrick’s Church, Drumshanbo with burial afterwards in the New Cemetery. Funeral Mass will be streamed live on https://www.churchtv.ie/drumshanbo/ and on Drumshanbo Parish Facebook.

Leitrim GAA are saddened to learn of the death of The Late Mary Kerrigan, Towneymoyle, Manorhamiltom, Co Leitrim.

The Late Mary is Mother of Shane Kerrigan (Kerrigan Quarries) who is current Sponsor of the Leitrim County Minor Team.

Leitrim GAA are saddened to learn of the death of Monica Lyons, Killahurk, Carrigallen, Co Leitrim.

The late Monica is Mother of Enda, current Strength and Conditioning coach with the Leitrim Senior Hurlers and former Leitrim Coaching and Games GDA and husband of Noel, who was a former Referee with Leitrim GAA.