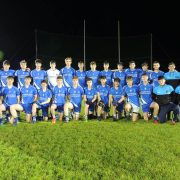 Ballinamore CS started much the better, points by Ciaran Cullen and Eoin McCaffrey had them leading by two points after 3 minutes. Carrick CS began to get a grip in the middle third and by the twelfth minute they lead four points to two following an excellent Jack Barnes point from play and three pointed frees by Stephen Goldrick. Shane Beirne from play, a Mark Keegan free and a superb Ciaran Cullen point left only a point between the teams after 18min but Ballinamore CS struck the first goal with their next attack, Mark Keegan finishing to the net from a tight angle. Carrick CS responded well and finished the half much stronger, kicking four unanswered points from Cian Ffrench, Shane Beirne and two Stephen Goldrick frees to lead at halftime by two.

Ballinamore CS opened the second half scoring with a Mark Keegan point following a foul on Aaron Hoare. Carrick CS responded with a pointed free of their own and over the next ten minutes points from Ciaran Cullen, Tom Prior and Cathal McHugh for Ballinamore CS, Jack Barnes and Shane Surlis for Carrick CS left the score Carrick CS 0 – 12 Ballinamore CS 1 – 08. The decisive score came in the seventeenth minute when a long ball into the Ballinamore CS defence was flicked to the net by David O’ Connell. Ballinamore CS pressed hard for the remainder of the game but their only reward was a point from a Mark Keegan free, while Carrick CS added two Stephen Goldrick frees to run out five-point winners.

Coaching and Games Development Under 11 Blitz