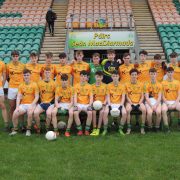 Midway through the second half of this very entertaining game, the scoreboard showed the sides level, 3-10 a-piece, however, in a three-minute blitz Meath ended the game as a contest, scoring three goals.

Leitrim started the game with a sense of urgency, Oisin Bohan and Caolan Clancy pointed frees and two superb goals from David O’Connell and Donal Casey left them leading 2 -02 to 0-00 after 4 minutes. Meath responded well, Points from Joe Moore (free), Matthew Costello(play) and a goal from Evan Corrigan pegged back Leitrim but further points from Diarmuid Kelleher(play), Caolan Clancy and Paul Keaney (frees) kept them in control.

Meath made two substitutions, bringing on Ian Birmingham and Conor Quigley and both players made an instant impact, firing over a point each and Birmingham setting up Matthew Costello for his second point from play. Meath levelled the game in the 20th minute with an excellent goal from Conor Quigley. Eoin McLoughlin replaced the injured Niall Keegan on the Leitrim team. Meath scored their third goal from a Luke Mitchell penalty which looked a very harsh call against the Leitrim defence. Jack Hughes and Tom Prior pointed, Oisin Bohan scored Leitrim’s third goal, reacting smartly to the ball coming back off the upright before Luke Mitchell brought the first half to an end with a pointed free.

The second half opened with Meath points from Ian Birmingham, Matthew Costello and two pointed frees by Luke Mitchell with Leitrim replies from Oisin Bohan, Diarmuid Kelleher and Caolan Clancy, 12 minutes played and the sides level. In the following 3 minutes, Joe Moore(two) and Evan Corrigan goaled and further points from Mitchell, Birmingham and Colin Hawdon sealed the win for Meath. Two Caolan Clancy frees and 1 -01 from Meath sub Aitzol King ended the scoring.

Leitrim will be disappointed at the manner of the defeat, they played very well up until the Meath blitz but players will learn that mistakes at this level are clinically punished. 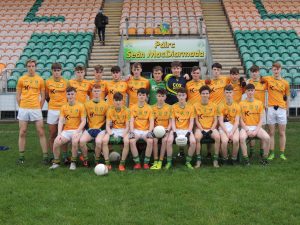