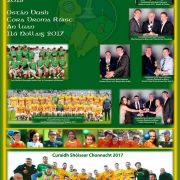 In advance of the County Convention and County Committee Meeting that decides playing structures for 2018, we list the various motions and it should be noted what the players told us in a survey carried out last October in conjunction with the Club Forum: