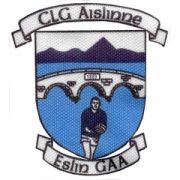 The Kube – Fundraising for The Kube is now in full swing. Adrian Mc Caffreys soccer tournament which was held on Saturday went really well for him with some very exciting games. Ciara Turbett had a great turnout for her bingo fundraiser on Sunday evening last in the community centre, while Darren Beirne’s darts tournament fundraiser which was held in The Green Rooster that night was also a huge success. Fundraising events coming up this weekend include John Mulligans quiz night which takes place in Spirit Bar on Friday night at 8pm, Margaret Mc Nabolas ceili afternoon which takes place in the community centre on Sunday starting at 3pm, and Barry Bohans pool competition which takes place in O’Carolans on Sunday night starting at 6.30pm. So there is something for everybody.

Sympathy – The club extends its deepest sympathy to the family and friends of Gus Guckian from Fenagh, Maura Foy who died in Lough Erill nursing home and Damien Mc Keon Keshcarrigan who died recently. May their souls rest in peace.