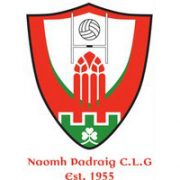 Josie Torsney RIP – On Saturday last we said farewell to our club president Josie Torsney. Josie a great Gael all of his life, had devoted his time to the development and progression of Gaelic games within the Dromahair community. He was one of the founders of the current St Patricks GAA club that we all enjoy today, when in the late 1960’s Josie entered a number of underage teams into competition. He had many roles within the club including Chairperson, Secretary and worked tirelessly on the club’s behalf to promote Gaelic games within the community

It’s well recognised that the first coach that a child comes in to contact with will be probably the most influential and that was certainly the case for those of lucky enough to be coached by Josie. He always treated everyone with respect and at the end of every game or practice everyone would come away feeling good about themselves. On the evening of a game or practice, Josie and his late wife Eileen would collect all of us at our doors and bring us by car to the village.When you look at the area that was covered in an evening, Killargue, Newtownmanor, Killavoggy, Killenummery, Drumlease and the village of Dromahair, many trips had to be made before and after the game.

He was well ahead of his time as a coach, his methods would fit seamlessly into any modern day game, Josie’s ability to break down each skill and explain to each of us how to perfect and practice our skills was rewarded in 1976 when St Patrick’s GAA club won its first underage title, the rural under-12 championship and indeed this team went on to win titles at U14 U16 and Minor.

In 1975 the club entered a junior team into competition, coached by Josie and in 1976 this team delivered the Junior championship to Dromahair, a remarkable achievement to bring the club to senior football within one year of establishing an adult team.

Josie had a great passion for Scor and Scor na nÓg and again he worked tirelessly over a range of different acts and groups to bring many county titles and a number of provincial to the club.

St Patricks GAA club thank you sincerely, Josie, you made much difference to the lives of so many of us, past and present. We offer our deepest sympathy to the Torsney family and thank them for their support of Josie in all of his work within our community.

Dunnes Bar Division 2: The campaign gets under way this Saturday 31st March with a trip to Dromod to play Bornacoola at 6.30pm. We wish Hughie and the lads the best of luck for the season ahead.
Swan Bar Division 4 – Last weekend’s game against Kiltubrid was postponed.
Underage – Our U13 team were defeated away to Sean O’Heslins on a scoreline of 2-09 to 1-07 at the weekend. U17 team away to Drumkeeran on Wednesday 28th @ 6.30pm. Game vs Rinn Gaels was postponed last Saturday has been refixed for this coming Saturday in Dromod @ 12pm.
Congratulations – Well done to Dromahair GAA player Robbie Cunningham who was part of the St. Pat’s DCU team who were recently crowned All Ireland Junior champions.
Training – Training returns every Tuesday for underage teams in St Clare’s gym Manorhamilton.
U7: 6.30pm to 7.30pm, U9 7-8pm and U11 8-9pm. New players are very welcome to attend. Registration forms will be available. Remember to wear gumshields and to bring a drink.
26th March 2018
https://www.leitrimgaa.ie/wp-content/uploads/2017/08/Dromahair.jpg 200 200 Leitrim GAA PRO https://www.leitrimgaa.ie/wp-content/uploads/2017/07/cropped-Leitrim_Crest_3d_Trans_552x552-180x180.png Leitrim GAA PRO2018-03-26 22:26:062018-03-26 22:26:06St Patrick’s Dromahair GAA Club Notes 26/03/2018