Shay Reynolds RIP – It was with great sadness that we learned on Sunday morning of the passing of a true legend of our club, our President Shay Reynolds. Shay was widely known and loved, not just in Cloncolry, Dromod and Bornacoola, but throughout Leitrim and far beyond. He was the epitome of the community volunteer and was at the heart of everything positive that took place in the area over the years, from his time as a youth in Mrs Moffatt’s Dromod marching band, to his stage appearances in Cloonturk hall, the wren boys, his work with Dromod Development, Bornacoola Community Development, Cloonmorris Graveyard Committee and the Cloonturk Christmas choir to name but a few.

Yet it was undoubtedly the GAA that provided his most passionate outlet. Over the years he became synonymous with Bornacoola GAA, but his footballing life actually had its roots with our neighbours Annaduff, with whom he played in the 1960’s while our own club lay dormant. And he played with great success too, starring on the losing side in the 1966 County final against Aughavas. While he captured a JFC medal with his victorious Annaduff teammates in 1972, there was little doubt that once the Bors reformed in 1973, Shay would cross back over the Eslin River and for the next number of years he starred for the Bors as they reached two Junior Championship finals in 1977 and 1978, unfortunately losing both. Consolation came in the form of a Junior league title in 1976 but when talking with Shay about those years, it was clear that the fun and enjoyment off the field was almost as important as what happened on it and that particular group were widely known for their sportsmanship and ability to enjoy the social as well as the playing side of the game. And Shay, of course, was always at the heart of the craic! When he retired from playing, he took up refereeing and again gained the respect of his peers when being named Leitrim Referee of the Year in 1980; for spells in both the 1990’s and in the 2000’s, his attention returned to on-field matters when he served as a selector with various Bornacoola adult teams.

He was also heavily involved in Scór throughout his life – initially as a participant and later as an administrator when he served in a number of roles, including as Treasurer of the Connacht Scór Committee; indeed he became well known throughout the province in this role and it was a source of great pride to him that all three of his sons – the late Kevin, Cathal and John – participated in Scór and kept the cultural flame burning. His greatest contribution to Bornacoola GAA however came in his fourteen years as Chairman of the club (1989 to 2002), where with his good friends Declan Bohan, as Secretary, and Sean Mc Gowan, as Treasurer, the Club entered a period of growth that saw a plethora of titles secured at underage level and participation levels reach new heights as Bornacoola began to field three adult men’s and an adult ladies team annually (all within just 25 years of reforming from nothing as a club). The Club moved from Junior through Intermediate before finally obtaining senior status again in the Autumn of 1997, something that pleased our then Chairman greatly. To see the Bors, with his son John as part of the panel, reach the County senior finals of 2005 and 2008, was the fulfilment of a dream for Shay that at many points in the journey must have felt a million miles away. An ever-present on the sidelines as a supporter, it was always instructive to seek his views in the Railway (or the Copper) after a game and if there was a small Power’s to hand when seeking them, then so much the better!

His love for Bornacoola was only matched by his pride in his native County. For home games in Páirc Seán he would be on duty as a steward; for away games there was the pre-match pep talk and a little sustenance to be consumed in Jimmy’s (or Cox’s) before loading up with his close friends the late Jimmy O’Connor and TP Cox and pointing the car in the direction of the Hyde or Tuam, Aughrim or Dr Cullen Park. There were more bad days than good, but his loyalty and pride never wavered. It was appropriate therefore that he was appointed as Chairman of the Leitrim Supporters Club in 2010 and he – unsurprisingly – excelled in that role too helping to oversee the generation of hundreds of thousands of Euros over the years through the Supporters Club Draw. For many years he was a voice of wisdom and reason at County Committee meetings, and always represented the Bornacoola view fairly but firmly.

Yet even the love and commitment he showed for the local community, for his parish, and for his county was overshadowed by the love he bestowed on his best friend and lifelong companion Mary, and on his sons Kevin, Cathal and John. Kevin’s sudden passing a few years ago, while in his mid-30’s, was an unbelievably cruel burden to bear. The grace and bravery with which they carried their grief typified the character of the Reynolds’ family and through it all, Shay was the rock for all around him. The last month of Shay’s life was spent in Mullingar hospital, surrounded by his family, but for someone who gave so much to so many, who was such a public presence and who was so generous with his time for others, there was something fitting in his last weeks being surrounded by and filled with those who knew and loved him the most. We can but offer our heartfelt sympathies to Mary, Cathal and John, to his son in law Simon, daughter in law Nicola, grandson Kian, granddaughter Laila, sisters Maureen Hanley (Strokestown) and Betty Murray (Greystones) brothers in law, sisters in law, nieces, nephews, relatives, neighbours and many, many friends.

Known all over the County, when news of his death broke on Sunday morning, our Club Facebook page was inundated with messages of sympathy from those who struggled to get their heads around the departure of a man who was simply a colossus in the community. The majority of posts used the word “gentleman” and that was not by accident. He was a friend to so many people, in so many ways a father to our community, and his easy way, generosity of spirit, his ability to tell a great story and that big laugh will never leave the memory. We are comforted by the fact that somewhere in heaven he is sharing a drink with those he loved and who have gone before him, and when he’s called on for a song, the Four Green Fields or the Croppy Boy will surely get an airing. Our loss is their gain. Níl tú imithe uainn a chara dhílis, ach romhainn. Solas na bhfláitheas dá anam uasal. 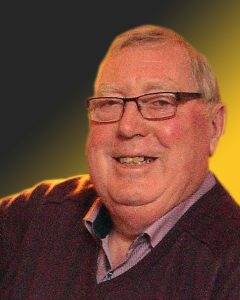 Division 4 – The Juniors return to action on Saturday evening next, when they travel to Ballinamore to take on Sean O Heslins. Throw in is at 7pm.Di

Ladies Football – The Bornacoola/St Mary’s Ladies played Annaduff on Sunday morning last and following a good victory are now safely through to the league semi-final. Well done to all involved.

Underage News – Training will commence for all age groups on Saturday 21st of April at 10.30 am sharp. We are asking this year if all players could be there on time as it makes it easier for coaches for setting up drills.Our coaches have been busy training and as a club we have met our requirements that all coaches have a minimum of foundatìon and child protection training with many coaches at level 1 standard and first aid training.Please ensure your child wears gumshield to all training sessions.  If your child has not registered please contact Suzanne Maguire on 087 3898205 as we will need everyone registered for insurance purposes.

U9 Blitz – A series of U9 blitzes for the Bors got underway on Saturday last and will continue for the next number of Saturdays. Last Saturday, St Marys were the visitors to Dromod and we had a tremendous turnout with three Bornacoola teams playing at the same time. We had both boys and girls teams togged out which was fantastic to see. A huge thank you to our coaches for setting everything up, to all of the parents involved for bringing snacks and for all their help in making drinks for the visiting children and parents. Next week we travel to Kinlough for a similar day’s activity.

Clothes Collection – Our Annual Clothes collection will this year take place on Saturday morning, July 14th – so start gathering together your old clothes, sheets etc for collection on the day

U13 Shield Final – Our eligible U13’s are competing with Gortletteragh this year and on Saturday last they finished off their league campaign with an appearance in the Shield Final against Allen Gaels in Drumshanbo. In a tremendous game of football played in a great spirit, Allen Gales had the elements in their favour in the first half and reached the interval with a three point lead. The second half proved to be a titantic struggle and while Gortletteragh entered the closing two minutes trailing by just a point, a late Allen Gaels goal secured a four point victory for the home team. Team was David Liu Doyle, Tommy Reen, Luke Mc Manus, George Glaze, Nathan Ryan, Oisin Maguire, Noah Mc Nulty, Mathew Davies, Ryan Fanning, Riaghan Ward, Jack Gannon, Adam Reen, Jonathan Boyle, Senan Woods, Aaron Carney and Jack Reynolds.

Mothers and others – Our Football for Mothers and Others got up and running again for 2018 recently – anyone interested in getting involved, should contact Cora Mc Cauley on 087 6104974