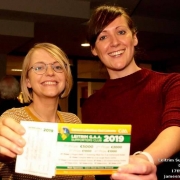 There was a terrific turn out of Leitrim GAA Supporters at the Celtic Suite, Croke Park, last night as the Dublin Branch of the Leitrim GAA Supporters Club hosted its annual event. A gathering of approximately 170 people had two hours of informative talks and great entertainment under the direction of the Dublin committee led by Chairperson Mike Feeney who introduced proceedings. MC for the night, the excellent Colin Regan, interviewed Leitrim GAA Chairman Terence Boyle on ongoing developments at Leitrim GAA and also Leitrim GAA Senior Team Manager Terry Hyland as he looked forward to the season ahead. Eamonn Duignan gave a detailed presentation on the ‘Buy a Brick’ fundraising venture to complete the Centre of Excellence at Annaduff. He revealed that this campaign has raised €70,000 to date as we look forward to concluding this project by June of this year.

The second part of the show belonged to 2019 Leitrim Guardian Person of the Year Seamus O Rourke who brought the house down with his inimitable style of humour which sent the punters home smiling. Our thanks to all who attended the event and indeed to all who joined us via Facebook Live from around the world. We look forward to a great year for Leitrim GAA and you can help us greatly by getting your ticket for the 2019 Supporters Club Draw and indeed if you could help us complete the wall in Annaduff that would be the icing on the cake!