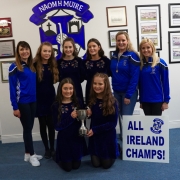 Saturday last was a memorable occasion for Leitrim Scór as St Marys Kiltoghert were declared All Ireland champions in Ballad Group at the All-Ireland final in Castlebar.

For the Carrick club, it was a long-awaited and richly-deserved reward for perseverance and persistence. For each of the previous four consecutive years they had reached the All-Ireland finals, they travelled to Killarney, Sligo and Belfast with great hopes, only to come home disappointed on each occasion. Others would have given up but sheer determination from the Carrick ladies and their backroom team didn’t deter. Hope kept them going and the dream that their day would come and come it finally did on Saturday last.

With the club having competed and come so close over the last 10 years in both Senior and Junior All-Irelands before them, The young singers hung on their mentors and tutors every piece of advice and it surely paid off. The team of Elsie Harmon, Eleanor Smith, Rionach Nic Conmara, Roisin Noone and Ava Brogan gave a moving and outstanding performance which saw them see off Ardagh of Longford. Watty Grahams, Derry and Cullen of Cork. The long wait was finally over.

The sight of bonfires blazing on the approach to Pairc Tom and the grounds of St Marys clubhouse at 10.00pm last Saturday and the club lining the way to the den to greet them back made it all worth it. It was a memorable homecoming as the ladies performed at ease & celebrated their historic win with their friends and supporters.

St Mary’s win was the second title to the club since their first and only win in 1971 when Tom Fitzgerald won recitation in what was the 2nd year of Scór competition. To win this All-Ireland on the 50th year of the competition, it was a very long wait. It was also something memorable for Leitrim as this was the first time ever that a Leitrim club had ever won an All-Ireland Ballad title in Scór na nÓg. With previous titles in Nuachleas (now Leiriu) Sèan O’Heslins in 1997, 2001 & 2006) question time (Sean O’Heslins in 1988 & 1991, Bornacoola  2001) and Instrumental Music (Carrigallen 1989) at Junior level.

Ballinamore Sean O’Heslins represented Leitrim at the All-Ireland quiz last Saturday also. The young team put a massive effort into preparing for the day & did impressively well as the Questions were quite tough. Its such a great experience for such a young team.

Leitrim senior scór quiz takes place this Friday 22nd February in St Joseph’s Centre Leitrim Village. The venue is next door to the village church. Competition starts at 8.30pm. Clubs are encouraged to take part. Each entry must consist of 4 club members, aged from 17, effective 1st January 2019. Leitrim winners qualify for the All Ireland final on April 13th in Castlebar.