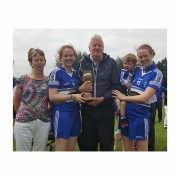 Leitrim GAA is greatly saddened at the sudden passing of Tom Guckian, Kiltoghert, Ck-on-Shannon, who passed to his eternal reward early on Friday morning. Tom, a retired staff member of ESB, was battling with ailing health over the past couple of years but met all these challenges determinedly and refused to give in, always airing with great positivity. An avid GAA follower of all codes, Tom made it to TEG Cusack Park, Mullingar, on Sunday week last to support the Carrick Hurlers in their recent All-Ireland Junior Hurling Semi Final, such was his love for his local teams. He was due to attend the St Mary’s Kiltoghert Gala Presentation event on this Saturday night but unfortunately, this wasn’t to be.

Tom has had a lifelong association with many aspects of the GAA in Leitrim and while he never played underage football for St Mary’s Kiltoghert, he always showed a keen interest in all the club’s activities and became involved at officer level at a young age becoming Treasurer in 1983. He continued in this role for 8 years, while also playing club football at Senior and Junior level.

He captained St Mary’s to a Junior Championship final in 1988 and at this stage, his great organisational skills were becoming obvious when he became manager of the club’s second team a role he held for 10 years during which he led St Mary’s to the Intermediate title in 1995. This was the year that St Mary’s Kiltoghert took the Senior, Intermediate and Minor titles, a feat unparalleled and unlikely to be ever matched.

In 1996 he took over as Chairman of the club and held this role until 2003, during this time he spearheaded the development of the new club grounds at Castlecarra, affectionally known to all as Park Tom. This was a jewel in Tom’s Chairmanship crown and one of which he can be extremely proud. The grounds, which are a hive of GAA activity, have been of tremendous assistance to Leitrim GAA, particularly on big match day in Avantcard Páirc Seán Mac Diarmada.

Fundraising is the bane of many people’s existence and many run a mile from it. Not Tom though! He always played a big role in any fundraising for the club and took great delight when his club’s lotto team topped the sales figures. In addition to this Tom has been a long time member of the Leitrim GAA Supporters Club Committee and used his talent in this regard to great effect. Tom rarely missed the traditional annual launch of the Leitrim Supporters Club in Dublin and was an ever-present on the Leitrim Bus to Dublin for these occasions in the company of his wife Tina.

At County GAA Administration level Tom served on the county Competitions Control Committee for ten years and was its Chairman for 5 years. During this time he was always approachable and dealt with all issues fairly and in the best interest of Leitrim GAA. He left his club outside the door on all occasions when making CCC decisions and that is the very best tribute we can pay to him on his tenure in charge of that committee. In recent years he had been a member of the Connacht GAA Hearings Committee which was a great honour bestowed on him to have been chosen on the ultimate provincial disciplinary decision-making committee. Of course, Tom has had a leading role on many Connacht Council match days around the province in that most unglamorous of roles, the matchday steward which involves a time investment or erosion of time, if you look at it another way, that goes way beyond what we normally associate with attending matches.

Before the era or Fás/Tús schemes, Tom was always to be found doing voluntary work at Avantcard Páirc Seán Mac Diarmada preparing for games and became Chairperson of the Páirc Seán Committee in 2010 and oversaw many developments at the grounds over his period in charge. An abiding image of Tom on match day would have been his scurrying up and down the tunnel, keys rattling, and making sure all is in perfect working order. Post-match you would most likely see him doing a lap of the field with a fertilizer bag collecting the flags and remaining on until all had exited safely. Another example of the many unglamorous but vital GAA roles that Tom gladly took charge of, such was his enthusiasm for the association that was such a big part of his life.

As a supporter, Tom clocked up many miles supporting his club and county across many age grades and codes. He was particularly proud of the sporting achievements of his daughters Lorraine and Lisa and was the staunchest supporter of their team over the years. Despite his ailing health, he made sure to be present at all their matches, no matter where in recent years and it was a pleasure to meet him on these occasions.

On February 3rd, 2018, Tom Guckian was inducted into the Jim Lynch Leitrim GAA Hall of Fame at the County’s Annual GAA Awards Ceremony. This was a fitting tribute to all of the work that Tom had got through in a lifetime’s association with GAA and a recognition of the fact that the mountains of work that goes on behind the scenes are greatly appreciated by all. Tom was, in this regard, a hero of many and for all! Tom gloriously captained many great teams whose work goes on off the field.

We are greatly saddened by his passing, which leaves yet another large void around St. Mary’s Kiltoghert, Avantcard Páirc Seán Mac Diarmada and Leitrim GAA. However, it is his family who will feel  the greatest loss and we express our sympathies to his wife Tina, daughters Lorraine and Lisa, grandson James, brothers Joe and Patsy, sister Mary B Mulvey (Butlersbridge, Co.Cavan), brothers-in-law Michael, Johnny, Charlie, Seamus, Martin, Sean and P.J, sisters-in-law Mary, Maggie, Phil, Margaret, Clare, Maura and Bernadette, nieces, nephews, relatives, neighbours and a large circle of friends.

Reposing at his home tomorrow, Saturday, from 2 o’clock until 6 o’clock and on Sunday from 2 o’clock until 6 o’clock. Removal to St.Patrick’s Church, Gowel on Monday morning to arrive for Mass of Christian Burial at 12 o’clock with funeral afterwards to Kiltoghert Cemetery. Family flowers only please, donations, if so desired, to Irish Motor Neuron Association (imnda.ie). House private outside of reposing times and private on Monday morning please. 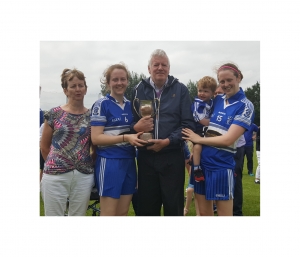