News
You are here: Home1 / News2 / Development3 / Leitrim Wall Foundations In Progress at Centre of Excellence 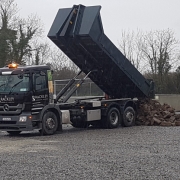 The work has commenced on the first stage of the Leitrim Wall at the Centre of Excellence in Annaduff and work has been ongoing over the past eight days. At the very outset, Martin Baxter of Brackley Landscaping took charge of the contract and over the past number of days things have begun to move in a very positive direction with the foundation laying and associated groundworks. We are delighted to have advanced the project to this stage and in thanking the many who have contributed to this fundraising effort since it was launched in New York last May and closer to home over the Summer months, we continue to appeal to all who may have an interest in getting involved in this initiative that now is the time!!

If you wish to have your name remembered forever as having contributed to the development of the Leitrim GAA Centre of Excellence at Annaduff and the development of Gaelic games in the County, please contact any of the following.People who have received brochures can return to any committee member or directly to the Centre office at Annaduff. People can also register online.

The following are contacts covering each club area: