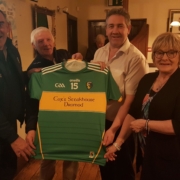 On last Saturday night at the Leitrim Supporters Club Draw, Cox’s Steakhouse, Dromod unveiled their sponsorship of this year’s Leitrim Under 20 Team, which will soon be in action in this year’s competitions. The Leitrim lads will compete in the Philly McGuinness Memorial Cup and later in the Connacht Under 20 Championship. We are delighted to be associated with the business and their sponsorship of the Leitrim GAA is much appreciated. Cox’s Steakhouse is also the main sponsor of the annual Leitrim GAA Supporters Club Draw. We thank Adrian Cox, Eugene Cox and all associated with the Dromod based hospitality business and look forward to a successful partnership on and off the field in the season ahead. 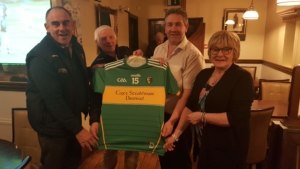