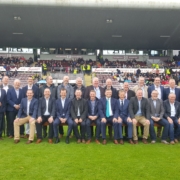 At yesterday’s 2019 Connacht Senior Football Championship Final, the guests of honour were the members of the 1994 Leitrim Senior Football Panel, management team and back-room staff. Connacht GAA Council were honouring them on the Silver Jubilee occasion of that historic victory over Mayo which occurred on July 24th, 1994, a day which brought such joy to all Leitrim people at home and abroad. The players and management were introduced to the crowd between the two matches at Salthill, and were later feted at a function at the Galway Bay Hotel, where they were introduced by County Secretary of the time, Tommy Moran, and presented with crystal momentoes to commemorate the historic landmark of landing Leitrim’s second Connacht Championship and bridging a gap of 67 years back to the only other Senior Championship success of 1927. 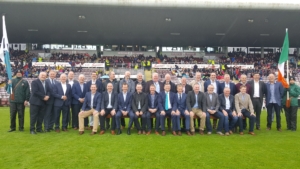 Jason Ward, a member of that panel, was unavoidably absent on Sunday but had met with the players on Saturday night, and Colin McGlynn was on holidays in the USA.

On Sunday, journalist Tommy Conlon, a native of Ballinamore and brother of team member Liam Conlon, wrote a fine piece in the day’s Sunday Independent, which captured the essence of the achievement that was 1994. You can read the article here

Leitrim Under 20 Panel to play Roscommon on Wednesday June 26
Scroll to top
Posting....