News
You are here: Home1 / News2 / General3 / Thank you very much from #Leitrim GAASupportingOthers 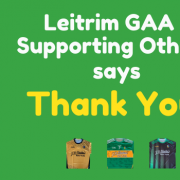 It’s been a week since #LeitrimGAASupportingOthers brought together many Leitrim Players, current and past county players, club players, supporters young and older, female and male alike, right across the globe in unity to raise money for very worthy causes. What commenced as an initiative and was driven by the current Leitrim Senior Football Team and Management became very much a team effort, with a vigorous media campaign leading into the weekend and the intensity of that campaign drove the message home to such a degree that the initial €10k target was more than doubled by this weekend and has concluded at €20,415!

The organising committee and Leitrim GAA is really indebted to all who made contributions to this cause and you will be pleased to know that we will be making a donation of €5k to each of Pieta House and North West Stop with the remaining balance being presented to Sláinte 2020. The two Irish organisations, Pieta House and North West Stop provide an excellent service in the provision of help to people who are facing mental health challenges and we appreciate the efforts they make to help those in need. Sláinte 2020, is New York based and has only recently been formed in response to the chronic need that is among the Irish in New York as a result of the Covid-19 pandemic.

After what has turned out to be a memorable campaign, we again thank all for their effort, sacrifice and donations to these worthy causes and thank all the people behind the scenes, too numerous to mention, who made this happen, in all aspects of the promotion and coverage received both in the lead up to and in the aftermath.

As promised there were three pieces of Leitrim gear, including a signed jersey to be raffled among those who made donations, and this raffle will take place on Tuesday night at 8pm.

The final word on this goes to the main beneficiaries of this fundraiser, namely the crisis-stricken Irish people in New York, and on behalf of the organising committee of Sláinte 2020, we have a message from JP Clarke’s Saloon, McClean Avenue, Yonkers, which includes Caitríona and Seamus Clarke, Main Leitrim Team Sponsors and Lisa Sorohan, Drumshanbo and Stephen Maguire, Drumreilly.