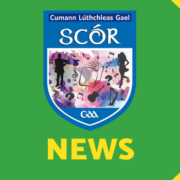 Connacht G.A.A. ensures the West is well and truly awake!

The G.A.A. dressing rooms, pitches, walkways and training grounds around the country maybe desolate, however, it’s cultural wing, Scór, is busier than ever. From Manorhamilton in North Leitrim down to beautiful Kinvara in South Galway, and from Achill on the Atlantic coast to Tarmonbarry on the Roscommon/Longford border, there’s barely a club in the mighty West left untouched by GAA Scór activities. How fitting so are the words of Thomas Davies’ rousing ballad ‘The West’s Awake’, to celebrate Scór participation in Connacht during these unprecedented times and represent the province in Virtual Scór.

This memorable rendition of a song synonymous with wonderful sporting days for western teams, features over 30 musicians and singers from 14 clubs across the province. With all local and county rivalries put aside, these performers have contributed their time and expertise for this special collaboration in a spirit of goodwill and pride befitting our country’s response to the challenging times we are living through. A great surprise to many was the inclusion of G.A.A. legends Jimmy Murray (Roscommon), Joe McDonagh (Galway) and of course, who many would regard as the original voice of Gaelic games, Dublin’s, Mícheál Ó hEithir.

The project was co-ordinated by Tom Murray, Rúnaí of Coiste Scór Chonnacht, who put the call out to Connacht Scór officials and delegates from each county to liaise with people at local level. Seán Ó Murchú, Cathaoirleach, Coiste Scór Chonnacht, has praised the efforts of all involved saying “it’s so heartening to see the great calibre of talent in the west making such a united contribution to ‘Virtual Scór’”. These sentiments were echoed by Gerry McGovern, Uachtarán, Comhairle Chonnacht, who remarked “all in Connacht G.A.A. can be immensely proud of this initiative”.

Ensuring that the final product was successfully brought together, the expertise and experience of Gareth McGreevy from Saul GAA in Co. Down was brought on board. Gareth has been responsible for some excellent ‘Virtual Scór’ collaborations over the past few weeks which have seen singers and musicians from all over Ireland record versions of the ‘May the Road Rise to Meet You’ and Dana’s ‘All Kinds of Everything’. Connacht Scór is indebted to Gareth for lending his time and professionalism to his fellow Gaels in the west.

‘Virtual Scór’ has been a source of tremendous entertainment, distraction and fun over the past two months. The absence of our native field sports and club activities has left an indelible void in the lives of many and presented an obstacle to the natural expression of our Irishness offered through Cumann Luthchleas Gael. ‘Virtual Scór’ has hugely helped to counteract this void for many Gaels all over the country and beyond, and so Connacht Scór would like to dedicate this song to the men behind the movement, Aodán Ó Braonáin, Chairman of the National Scór Committee, and Rúnaí, Jamie Ó Tuama (Páirc an Chrócaigh), for their tireless work and efforts in keeping Scór to the fore in this novel way.

Singers and musicians involved in the production are:

The production was launched at 8pm on Friday evening on Connacht G.A.A.’s Facebook page. In less than 20 hours it has over 21,000 views from right across the world.

#LeitrimGAASupportingOthers has had good night’s sleep!!