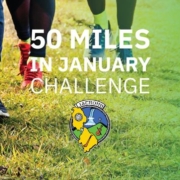 Leitrim GAA is organising a unique and exciting  fitness challenge in January to raise funds for all Leitrim inter – county  teams. Supporters are asked to  sign up to walk , run, or for the very ambitious solo 50 miles during the month.  There has been an excellent response to the Challenge so far with over 500 supporters joining up from all over Leitrim and beyond including Melbourne, Chicago and Dubai.

The lead on the project is former Leitrim footballer Adrian O Flynn from Manorhamilton who is experienced in organising  very successful similar type fundraisers for a number  of charities in Ireland and the UK.
This initiative comes at a critical time for Leitrim GAA finances due to the fallout from Covid.  The target is to raise €50,000  and this will ensure the preparation of  all Leitrim teams from academy to senior.
Enda Stenson Chairperson Leitrim GAA said. “This is a wonderful initiative  and I thank  Adrian O’Flynn for bringing it and his vast expertise to  Leitrim  GAA“.   He said he is delighted to see so many people signing up for the Challenge and Leitrim is on track to have the fittest supporters  in Ireland by the end of January.
Also welcoming the 50 Mile challenge is Leitrim Senior Manager Terry Hyland who said Leitrim team management and the Leitrim panel are fully backing the initiative  and members of the team will be participating themselves.   He  is encouraging as many supporters as possible to get involved and join the wider Leitrim  fitness programme.
Joining the campaign is very easy according to Adrian O Flynn,  simply go on to the Leitrim GAA website and  you will be directed to  join the 50 Mile team. You will the be given simple instructions on how the campaign and Go Funding works. The team is growing by the hour and there is an opportunity to link up with fellow participants across the world and have a bit of fun.

To become a fundraising team member: