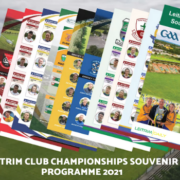 This is the culmination of months & months of work to showcase the 1,100+ players who will take part in the Leitrim Football & Ladies Football Club Championships this summer.

You can get your copy of this publication online here or at the following Outlets:

Any other outlets who would like to stock copies of the publication can order them from Breifne at 083 4853420 or info@leitrimdaily.com

The book will also be available at pop-up shops at some championship venues over the weekend.

With a photo & profile of every player from all 23 Gaelic Football & 13 Ladies Football clubs it is a must have companion for players, coaches and supporters of each club across the entire county.