News
You are here: Home1 / News2 / County Football3 / 40 Years Ago They Made History 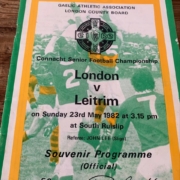 40 Years Ago This Year Leitrim Went To London For the First Time.

It was a very nervous Leitrim team that went to play London  almost forty years ago on the 23rd May 1982. Leitrim had reason to be nervous as in 1977 London caused a sensation by beating Leitrim in 1977 in Carrick on Shannon by 0-9 to 0-6. 1982 was the first time Leitrim played in the Connacht Championship outside Ireland and made a piece of history. Leitrim had prepared well this time. The Dublin based players trained at UCD with the Dublin based Kerry players under the watchful eye of the Master, Micheal  O Muircheartaigh. The Leitrim team were flying.

Forty years ago it was  a novelty flying to any match. The travel arrangements were published in the Leitrim Observer. The Leitrim panel departed Dublin Airport at 11.15 am on Saturday morning and were met at Heathrow Airport by members of the Leitrim Peoples Association and members of the London County Board.  From the airport we travelled to Ruislip for a light training session followed by a lunch organised by the London Board. After the lunch the team travelled to their hotel, the Tara Hotel , where the team would relax and watch television. There was great excitement in the lobby when Jimmy White the well known snooker player  appeared  and signed a few autographs for Leitrim people  on the back of Carrolls cigarette boxes. On Sunday the team left the hotel at 1.00pm for Ruislip . After the match the team were the guests of honour at a function jointly organised by the Leitrim Peoples Association and the London Co Board in the Irish Centre in Camden town.

At the time Big Tom was the King of Country Music in Ireland. On the Saturday evening some of the  music heads in the team went to a concert by the other King, BB King. They just got back in time for the roll call .

Before we left the TARA HOTEL for the match we posed for a photo taken by Willie Donnellan. We were joined in the photo by Tony Ward the former rugby star who played with Munster Leinster Ireland and the British Irish Lions and was also European Rugby player of the year in 1979.  Tony was over in London for the FA Cup Final. Leitrim were moving up in the sporting world.

On match day the teams paraded around the pitch led by London Irish Girls Pipers Band.  A member of that band had big Leitrim connections, Susan McGarty ,daughter of Willie McGarty and niece  of Packie Mc Garty. Susan moved to Leitrim many years ago and  now lives in Mohill. The Leitrim team showed one change from the match programme. Tom Reilly (Glenfarne) picked up an injury and Pat Flynn (Gortletteragh) replaced him at left corner back. Michael Oates in the Observer stated, Sean Creamer and Gerry Logan qualify for the joint title of ‘surprise omissions’. It was an exceptional Leitrim team built on the U-21 success of 1977 and included five players who were selected on the Leitrim team of the Millennium, Noel Crossan, Mickey Quinn, Ollie Honeyman, Mickey Martin and Frank Holohan. The team were good enough to win a Connacht Championship, it was a great shame that they didn’t.

The attendance was 3,000 and the match report stated ‘Leitrim overcame the feeble challenge of an outclassed London side. The final score was Leitrim 1-13 London 0-5 .Frank Smith was the pick of the Leitrim attack with five points all from play. Mickey Martin showed his class with a polished performance at centre half forward. He was the games outstanding player and hardly put a foot wrong the whole afternoon. Leitrim’s goal was scored by Seamus Mulhern’.

The Leitrim team celebrated well into Sunday night and a few lads just about made the plane home on Monday.

Leitrim played Mayo next on 13th June in Carrick on Shannon without their top scorer Frank Smith(injured)  and lost on a score-line of  2-7 to 1-7.  Losing by three points after shooting 20 wides (Mayo had eight) the Irish Press headline was’ Leitrim footballers literally kicked Mayo into the Connacht final by their own inability to put the ball between the posts’.

Forty years later Leitrim go to play London next Sunday.  London beat Leitrim in this years National Football League. London are a lot better organised than all those years ago but Leitrim should be good enough to win and qualify to play either Mayo or Galway in the next round.  Should Leitrim win and Mayo beat Galway then history will be repeated and Leitrim will take on Mayo again as they did almost 40 years ago. 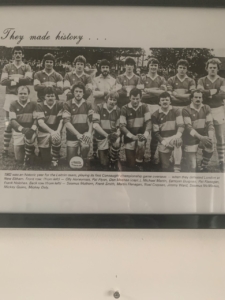 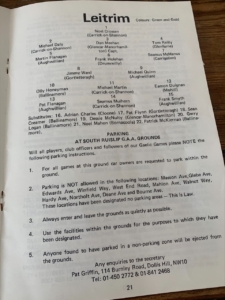 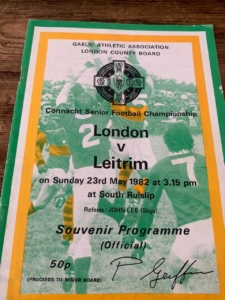 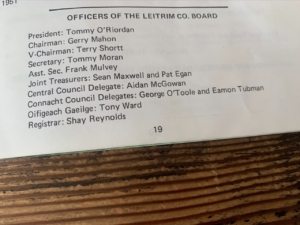 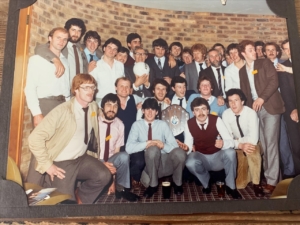 Emlyn Mulligan – 100 Appearances In Green And Gold Of Leitrim

Cycling From Leitrim To London For Charity
Scroll to top