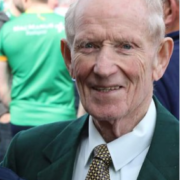 Leitrim GAA would like to offer its deepest condolences to the family of Proinnsias Redican, especially his beloved wife Mary, his children Siobhan, Gráinne, Fiona, Ciara, Diarmuid and Andrais, sons-in-law, daughter-in-law, grandchildren, great-grandchild, surviving brothers Andrew and Sean, sister Maureen and all his extended family and friends, on the occasion of his sad passing.

Proinnsias played with Fenagh St Caillin’s at all levels including Senior before emigrating to London in the 1950s  to work as a taylor on Saville Row. While training as a taylor in Roscommon and Sligo towns, Proinnsias won a senior championship medal with Craobh Rua GAA in Sligo. In his formative years, he had been part of the successful Fenagh St. Caillin’s Minor team which won the Leitrim MFC titles in 1950 and 1951, his teammates including the late Leitrim GAA legends Packie McGarty and Cathal Flynn.

In London, Proinnsias was introduced to the Tara GAA club by Mohill man Willie McGarty, this would ultimately lead to many more Leitrim and Fenagh St. Caillin’s men playing for Tara GAA over the years. He played on the senior team from the time he joined and for many years afterward. Proinnsias held many positions including Chairman of the Tara GAA Club on a number of occasions and at the London GAA County Board level where he helped to found the London Minor Board at which he also was Chairman for a period.

Proinnsias, faithfully, made an annual trip to Fenagh every summer where he attended any Fenagh St. Caillin’s games that were on no matter the level. It gave him great satisfaction when his native club won the Smith Monumentals Leitrim Intermediate Football Championship title in 2018 and returned to Senior Championship ranks after a long absence.

Leitrim GAA Connacht Championship matches with London GAA have been significant occasions in the GAA life of Prionnsias over many decades now, as we have made the 5-year trip to Ruislip. His connection and contribution towards both units were recognised no later than April 17 last, on the occasion of the Connacht SFC encounter London v Leitrim as Prionnsias presented the ball to the match referee, Martin McNally, in advance of the 2022 All-Ireland Football Championship opening game. It is rather poignant that he passed to his eternal reward on the morning after the 2022 All-Ireland Football Championship Final.

He was one of the most frequent attendees at any games in Ruislip in London. He attended for the last time 2 weeks ago where he had the great pleasure of seeing his grandson Tom help Tara GAA win the U15 championship.

Aside from the actual playing or involvement in the games, there are many people over the decades who have departed these shores in search of a better future who will recall the positive and caring influence of Prionnsias, and his family, in placing their anxiety at ease far from home, whilst giving them a foothold towards a better future. Their contribution towards a footballing future was unconditional. Their testimonials give us the true nature of the heart of the person that was Prionnsias Redican. He cared.

May his gentle soul rest in peace. 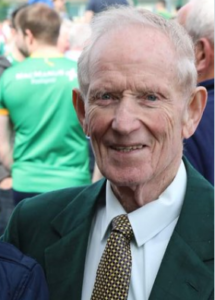