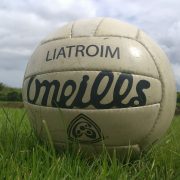 Leitrim completed their Fr Manning Cup campaign with a hard fought win over Wicklow  in Abbotstown on a score 3- 5  to 1- 9 on Saturday 13th August.

Playing in testing heat conditions Leitrim ,who were favourites to win following their unlucky last minute defeat to Wexford, were made to fight all the way  by a strong Wicklow panel.
Leitrim ,who used all of their panel of 24, got off to a strong start and lead 2  -2 to 2pts at the end of the first 20 minute break with the goals coming from Adam Reynolds and James Gilheaney -from a penalty.Gilheaney from Fenagh had a fantastic game through out.
Wicklow were stronger in the 2nd period and added  4 points, with Leitrim’s sole score coming from Josh Mc Namee -a difficult one following a brilliant mark .
The final period was end to end stuff and Leitrim were looking good until a Wicklow goal put them a point in front at 1-7  to 2-3. Leitrim stormed back with several good attacks and Brian Keaney, a younger brother of Paul  the St Marys and Leitrim player, finally crashed home a great goal from a rebound. Dara Greenan  added a point  which  was followed by a Wicklow  point .
Brian  Keaney completed the Leitrim scoring with a fine point. A late Wicklow point wasn’t enough and Leitrim held out for a thoroughly deserving win.
Afterwards the team management and panel reviewed the game and despite a number of key players being absent due to injuries there was great satisfaction that they won the game, while not playing as well as in some of the earlier matches. The key learning from the Wexford game was not to put all efforts into defending when ahead and it paid off.
It was good to talk to Sean Reynolds the St Mary’s goalie who is one of the team mentors and physio. Isn’t it great to see a young player giving his expertise to a younger Leitrim generation. Brendan Delaney, the enthusiastic GDA is full of  hope  for the Leitrim panels.
It was good to hear more about the revised coaching structures in Leitrim and to learn that in addition to the U16s, the U15’s were playing in the Humphrey Kelleher Shield in Longford  while the U 14’s were playing in a Connacht blitz in Ballyhaunis. So in total up to 80 Leitrim underage players were  involved in matches on the one day.
The full Leitrim panel was-
1 Liam Crowe MacDiarmada Gaels
2 Frank Cullen Leitrim Gaels
3  Eanna McNamara St Josephs
4 Thomas Maycock  St Josephs
5 David li Doyle Gortletteragh
6 Colm McLoughlin Fenagh
7 Cian Reynolds St Mary’s
8 Paul Honeyman  MacDiarmada Gaels ( Paul was injured and didn’t play)
9 Dara Greenan  Fenagh
10 Adam reynolds Fenagh
11 Senan Mooney Annaduff
12 Evan Kilrane Mohill
13 James Shanley Leitrim Gaels
14 James Gilheaney Fenagh
15 Cathal McCarthy MacDiarmada Gaels
16 Darragh Lee MacDiarmada Gaels
17 Aaron Gardiner St Mary’s
18 Darragh Gardiner St Mary’s
19 Josh McNamee  Leitrim Gaels
20 Noah McNulty Gortletteragh
21 Tommy Reen Gortletteragh
22 Dessie Wisley MacDiarmada Gaels
23 Josh Maye St Mary’s
24 Alan Gethins Dromahair
25 Brian Keaney St Mary’s
See photos below
1- The Leitrim players in a huddle during one of the breaks
2- Coaches Sean Reynolds, Ray McBrien and Martin McGowan
3- A happy Brendan Delaney, the GDA with responsibility for the team 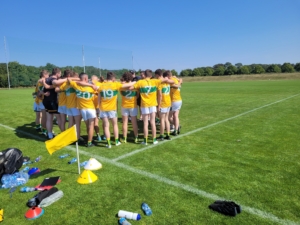 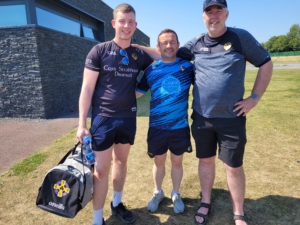 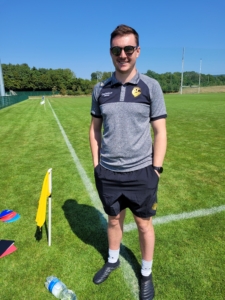