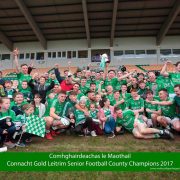 Congratulations to Mohill on winning the 2017 Connacht Gold Senior County Final in Páirc Seán yesterday. They had last tasted SFC success in 2015, when they landed the Fenagh Cup after a replay victory over Glencar/Manorhamilton in dramatic circumstances. This time, despite being two points in arrears at the interval 0-6 to 0-8, they made a bold statement of intent in the third quarter with five unanswered points that set them up for the final push towards victory. At the conclusion of events yesterday, they were worthy champions and withstood the very best that Glencar/Manorhamillton could throw at them to emerge victorious on a 0-14 to 0-11 scoreline.

It must be stated that Glencar/Manorhamilton, appearing in their eight final in ten seasons, were most worthy finalists and contributed handsomely to the best showpiece final in recent times, a contest that kept the huge attendance on the edge of their seats until Brendan Sammon’s final whistle.

But at the end, Mohill took the club’s seventh SFC title and Captain Daniel Beck, along with lifetime Mohill supporter Mary Kennedy lifted the Cup to rapturous applause. Mohill full forward Keith Beirne who contributed seven points on the day was awarded the Gabriel Cronin sponsored Man of the Match award.