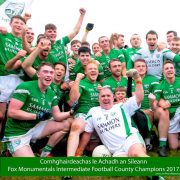 Congratulations to Aughnasheelin on winning the Fox Monumentals Intermediate County Final in Páirc Sean yesterday. It was a glory day for the lads from the parish of Oughteragh who reclaimed the Frank Reynolds Memorial Cup in front the largest crowd to witness an Intermediate decider in recent times. The noise and colour that greeted both victors and their opponents, Leitrim Gaels, onto the field was just a taste of what was to come as both sides enthralled their supporters and neutrals alike to a titanic struggle of epic proportions.

Aughnasheelin, who last tasted success at this level in 2008, were first to settle and raced into an early lead before Leitrim Gaels, appearing in their first ever IFC decider, found their feet. But settle they did and were just four points adrift at the interval as the lads in green and white led 0-9 to 0-5. The contest swayed one way and then the other as both sides attempted to steal a march on the other as the contest flowed from end to end. Gradually Leitrim Gaels reduced the deficit to a single point with just two minutes to play. However, captain Barry McWeeney secured the title for a delighted Aughnasheelin with a pointed free in the third minute of injury time and, on this occasion, the Gaels had to settle for second best. However, they may reflect on their excellent contribution to a decider of the finest quality and their turn will surely come in the future.

Barry McWeeney accepted the Cup from a proud Cathaoirleach Traolach O Baoil to the joyous approval of his club mates and supporters as Aughnasheelin look forward to taking their place in the 2018 SFC. Conor Cullen was awarded the Man of the Match award for his excellent contribution on a historic occasion for his club.