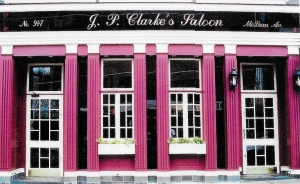 Leitrim GAA is delighted to announce, on County Senior and Intermediate Finals day, that JP Clarke’s Saloon, McLean Avenue, Yonkers, New York, will be the new sponsor of the Leitrim Senior Football team, taking over from the Bush Hotel which has been the main sponsor of county teams since it was announced at Convention in December 2009. The sponsorship deal is for three years, commencing in January 2019 to coincide with the start of the Connacht FBD Insurance Competition and Allianz Football League.

JP Clarke’s has been a home base for travelling Leitrim teams and supporters since Leitrim’s first Connacht championship match against New York in 2003 and also on the more recent trips of 2008, 2013 and 2018. The Leitrim players and management have been hugely impressed with the welcome and hospitality they have received over the years, and would like to take this opportunity to thank Seamus and Caitríona Clarke and their staff for all their help and generosity during our visits.

While it is unique for a county team to have a sponsor from the USA, it also reflects the strong connection between Leitrim and New York, and especially the ties between Leitrim and the Woodlawn/Yonkers section of New York which is often referred to as ‘Little Leitrim’.

When asked what sponsoring the Leitrim team means to him, Seamus Clarke replied, ‘Well, I suppose the Bard of Ballycarry put it best when he wrote: “The savage loves his native shore though rude the soil and chill the air.” It’s a great honor for me and all of us here at JP Clarke’s to sponsor our county and to show our appreciation for the support and loyalty shown to us by our Leitrim customers and the many Leitrim visitors who drop in to visit us each year.’

Seamus Clarke hails from the parish of Gortletteragh and his wife Caitríona, a Drumshanbo native, is the daughter of the late Leo Kenny who served as an officer of Leitrim GAA and the Connacht GAA Council for a long number of years. He held the position of Leas Uachtarán of Comhairle Connacht before his untimely death in 2000. Caitríona’s brother Padraig won a Connacht SFC medal with Leitrim in 1994.

Leitrim GAA looks forward to a fruitful partnership with JP Clarke’s and we look forward to mutual success. We thank Seamus and Caitriona Clarke for the confidence they have placed in us and we will carry their brand onto the field of play with pride over the period 2019-2021.

The new sponsorship brings to a conclusion the Bush Hotel sponsorship of Leitrim GAA teams over the best part of the past decade. Joe Dolan and Family came on board in 2009 and over the intervening years, the Bush Hotel has been synonymous with the Leitrim GAA brand. Leitrim GAA will always remain grateful to this family for digging most deeply into their pockets over the past nine years, many of which years have seen the country in the depths of a recession and grappling with austerity measures. To contribute as they did in times as we have referred to is a huge testimony to the generosity of the Dolans and their hotel business and Leitrim GAA wishes to place this on permanent record as a statement of our grateful appreciation. Many thanks, Joe, Rosie and all the Dolan family and indeed to your very professional staff for the huge generosity of support and the courtesy you have always afforded us. It has been the utmost pleasure to have been in partnership with you. We wish you and the Bush Hotel the very best in the future and we also look forward to supporting your business in whatever way we can. 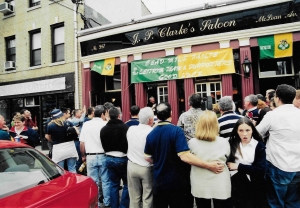 Leitrim Supporters pictured outside JP Clarke’s in May 2003

Fenagh Cup-the most sought after Prize in Leitrim Club Football.