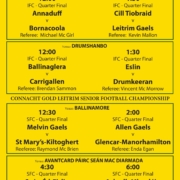 The Connacht Gold Senior Football Championship and Smith Monumentals Intermediate Football Championship move smoothly into the knockout stages with eight matches down for decision next weekend. There is a measure of intrigue attached to all fixtures and it should prove to be an action-packed ‘Super Sunday’ commencing with the IFC derby clash of Annaduff and Bornacoola (Cloone 12 noon) and IFC Ballinaglera v Carrigallen (Drumshanbo 12 noon) and concluding with the ‘Clash of Champions’ Aughawillan and Mohill. who between them have captured the last five Senior Championship titles, in Avantcard Páirc Seán Mac Diarmada at 6pm. 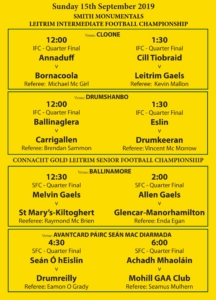