News
You are here: Home1 / News2 / General3 / Putting in the hard miles at 93 years of age for Leitrim GAA 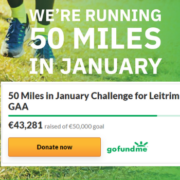 The big weekend is here as over 1,250 fundraisers from around the globe finish out the 50 Mile challenge in various time zones.  There have been many wonderful Leitrim themed stories shared amongst the group who assembled on Facebook. It has been a month long trip down memory lane coupled with some very touching stories.  The pride of following the Green and Gold has been the common bond.

The fundraising has been magnificent and we are now in the final leg as we approach the target of €50,000 in our main account.  To donate & help us get there – please click:   gofund.me/2b327521

One of the participants in the challenge is 93 year old PJ McNabola – a proud Leitrim man – here is a little bit about PJ:

PJ McNabola one proud Leitrim man.
Leitrim people are proud and none prouder to be from Leitrim than PJ McNabola.  PJ was born in 1927, a historic year for Leitrim football when they won the Connacht Senior Championship. He was present the next time Leitrim won the Connacht Senior Championship in 1994. When Leitrim got to the Division 4 final in 2019 against Derry in Croke Park PJ was not going to miss it.  At the age of 92 PJ’s family ensured he would be in attendance and the Leitrim Observer honored him by taking his photo in the Croke Park Hotel before the match.

For a man that never played football his love of football was all consuming.  In Eslin at that time they had no football team and PJ still regrets not been able to play.  Down the years he has been an avid fan of his beloved Eslin, he loves to cheer on his grandchildren Kyle, Joshua, & Kayleigh who play for Fenagh and Niamh who plays for Mohill.  PJ occupies the only Corporate Box overlooking Mohill GAA pitch namely his bedroom window !

PJ was an ever present at all Leitrim games over the years.   Wherever the match was PJ with his nephews Padraig & Liam Higgins would be there. Limerick or Belfast, wet wind or rain the three boys would be there.

PJ, at 93 is still out and about and has participated in our 50 Challenge during the month of January.

Well done PJ and all of the participants, you are wonderful people !

Leitrim jerseys everywhere, on Broadway, in the Bronx, in Queens…..
Scroll to top