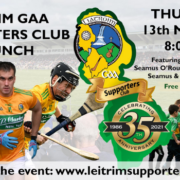 The 2021 Leitrim Leitrim GAA Supporters Club Draw will be launched tonight, May 13, at 8pm. This year’s launch, which celebrates 35 years of the Leitrim GAA Supporters Club, breaks new ground, and in keeping with the many changes that have affected the way we now operate, is a virtual event. This, however, makes it all the more exciting, and dare I say it, more accessible to many more people than would have traditionally attended the launch in Croke Park, as has been the practice over many recent seasons.
Tonight’s show will be of 75 minutes duration approximately and is not to be missed with many any varied contributions. As we look forward to the start of the intercounty season for our senior footballers and hurlers this weekend, and the return of our Under 20’s and Under 17’s to training this week, we similarly look forward to you joining in with us for a night of fun and craic at 8pm.

“Join us tonight @8pm for the launch of @leitrimgaa Supporters’ Club Draw with contributions from @seamus_orourke & @EdwinaGuckian plus a preview of the league and championship with senior team manager Terry Hyland. Join us live on https://www.facebook.com/GAALeitrim or www.leitrimsupportersclub.ie 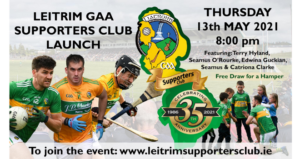 Introducing Leitrim GAA Podcast brought to you by a partnership of Leitrim Daily...