News
You are here: Home1 / News2 / General3 / Introducing Leitrim GAA Podcast brought to you by a partnership of Leitrim... 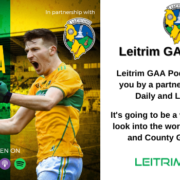 Welcome to the launch of a new look Leitrim GAA Podcast, brought to you by a partnership of Leitrim Daily and Leitrim GAA.   It’s going to be a weekly hour or so look into the world of Leitrim Club and County Gaelic Games.

In today’s first episode of the new look show, available as in both a video & audio version, county board chairman Enda Stenson (0:21) kicks off proceedings with an introduction to the show and a brief catch up for the activities over the close season including some innovative fundraising initiatives to keep the activities of the inter county sides at all levels running.

We’ll meet the panel of hosts for the year ahead with Derek Kelleher (9:49), Aidan Rooney (11:01) and Colin Regan (13:26) joining Leitrim Daily host Breifne Earley on a weekly basis for the year ahead. They review their last six months unique pandemic experience and the upcoming National Football League & Connacht Championship campaigns.

They talk about their respective Connacht final appearances and non appearances, Leitrim’s decent record in Markievicz Park and discuss split loyalties in the Rooney household as Aidan’s son Nathan will be in the Sligo squad for the National Football League opener on Sunday.

Former Chairman of Connacht Council and Secretary of Leitrim GAA Tommy Moran (30:02) joins Derek and Breifne to recall memories of Packie McGarty, the Leitrim legend who passed away recently. Tommy recounts his memories of the Mohill man’s performances in four consecutive Connacht Finals through out the late 1950’s and his automatic inclusion on Connacht teams in the Railway Cup and Ireland teams through four decades in the green and gold jersey.

Olcan Conway (42:53), Leitrim Senior Hurling Manager, drops in to talk about the new arrivals into his squad, how preparations have been going and how much he’s enjoying being back on a sideline in recent weeks.

Senior Football Manager Terry Hyland (59:49) joins Derek and Breifne to discuss his side’s preparation for the 2021 season in uncertain times. He discusses the challenges posed by Covid restrictions and the real world impact of committing to inter county gaelic games for players in 2021.

Terry chats about expectations within the squad going into Division 4 as one of the favourites to emerge from the division this year and his hopes going into a potential Championship semi final against Mayo or Sligo, in two months time.

The list of Show’s will grow as each week passes’ and you can get access to both video and podcast versions here:  LeitrimGAA.ie/Podcasts/