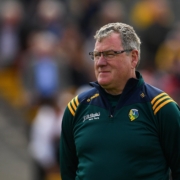 Leitrim GAA has been informed by Senior Team Manager Terry Hyland that he has decided to step down from the role. We wish to express our eternal gratitude to Terry and his entire backroom team, for the professional, wholehearted, and energetic manner in which they have carried out their respective duties to the team and all associated with it over the past three seasons. In his first year in charge, Terry oversaw the Allianz League promotion to Division 3 in 2019 and a rare appearance in a Croke Park Final which gave Leitrim GAA, its players, and supporters the biggest lift since the days of 1994. Over what has been the most difficult sixteen months in living memory since the onset of the Covid pandemic, Terry and his management team managed to navigate our players through difficult times for all concerned, while always respecting and abiding by the various levels of restrictions that we have experienced across these unprecedented times. Progress was inevitably affected by the huge disruptions that this caused to all involved.
Leitrim GAA is hugely appreciative and proud of its association with Terry and his professional and practical manner of dealing with both the board and its players over his three seasons in charge. We appreciate his many sacrifices on our behalf. Indeed his contribution to the activities of Leitrim GAA went way beyond those expected from a Senior Team Manager, particularly during the course of the pandemic. We will be always grateful for his very positive efforts with us and the wealth of experience he brought to the role of Leitrim Senior Team Manager. We wish Terry the very best of luck in the future.
We wish to also acknowledge the excellent contributions of Jason O Reilly, Gary Donohoe, Padraig McGourty, Kevin Downes, Padraig Dolan, Damien Eames, Colin McCabe, Shane Bohan, Fergal Wynne, Alan Loftus, and Ronan O Rourke as the various members of Terry’s backroom team over the past three years, while not forgetting the unsung heroes Leo Duignan, Kevin Lee and Brian Blake.
15th July 2021
https://www.leitrimgaa.ie/wp-content/uploads/2021/07/Terry-Hyland-scaled.jpg 1152 1500 Secretary Leitrim GAA https://www.leitrimgaa.ie/wp-content/uploads/2017/07/cropped-Leitrim_Crest_3d_Trans_552x552-180x180.png Secretary Leitrim GAA2021-07-15 15:56:262021-07-15 16:37:41Leitrim GAA Senior Football Team Manager Announcement